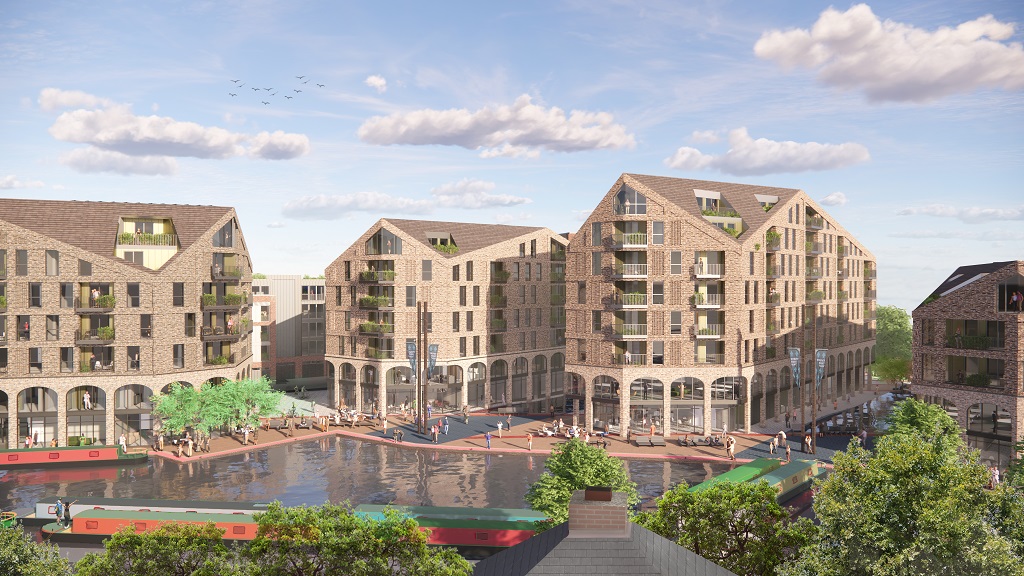 UK residential and commercial property developer Godwin Developments, working in partnership with Lowesmoor Regeneration Ltd, has submitted updated plans for its waterside mixed-used scheme Lowesmoor Wharf in Worcester, as a direct response to feedback received from local stakeholders and residents.

The development is an ambitious regeneration scheme of eight buildings and public spaces, designed by award winning architects Apt. When built, it will completely transform the currently industrialised canalside location in central Worcester into a vibrant, well-considered destination of exceptional quality.

Created to meet the city’s aspirations to bring more residents into the city centre, Lowesmoor Wharf will provide 238 modern spacious one-, two- and three-bedroom apartments with balconies. Occupants will have access to private indoor and outdoor spaces – such as rooftop terraces and community areas – across the six residential buildings.

The scheme will also help bring more businesses and jobs into Worcester through the provision of office, retail and food and beverage space, all set within generously sized fully landscaped public areas.

As a direct response to the feedback received from planners, the community and various organisations, the height of the tallest element of the scheme has now been significantly reduced to match the requirements of the Worcester City Masterplan. The scheme now steps up from three to a maximum of eight storeys at Lowesmoor Terrace, with two of the canal facing buildings having also been reduced by a storey each. In doing so, the development integrates very well into the surrounding landscape of the conservation area and the wider Worcester skyline.

An expert assessment on the visual impact of the amended proposals – also submitted as a part of the revised plans – has also been carried out and demonstrates that views of Worcester Cathedral and other significant landmarks in the city are not compromised.

Additionally, the proposed hard and soft landscaping throughout the scheme has been improved significantly to include suggestions by Worcester City Council and the Canal & River Trust, the charity with guardianship over the UK’s waterways. The blend of new materials, that are better suited to the conservation area have been supplemented by additional trees and wildflower areas, which will improve the biodiversity of the site. New landscaping features have also been included to better define the towpaths and walkways, balancing accessibility for residents and visitors with security for existing boat users and businesses. Improvements to the servicing of the scheme have also been introduced, protecting the marina and minimising waste vehicle trips across the development.

As with the previous proposals, the scheme will continue to prioritise the use of walking and cycling, as well as public transport and therefore will be mostly car free. However, as an additional amenity, it will include 12 car parking spaces and operate a ‘car club’ model for the benefit of residents. This will allow car sharing – including disabled parking spaces and EV charging – while the 606 secure cycle storage spaces on-site will improve walking and cycling opportunities throughout the development and further afield.

The retention of heritage assets on-site has also been carefully considered, with the proposed scheme planning to carefully restore, for community use, the Portmaster’s House and the buildings facing Lowesmoor Wharf. The inclusion of water features resembling the historic canal fingers will echo the rich history of the site, while also creating focal points for residents and visitors to enjoy.

Development director at Godwin Developments, Matt Chandler, said: “Lowesmoor Wharf is a scheme of exceptional quality and outstanding design but most of all a scheme of ambition – to bring new residents, visitors and businesses to central Worcester and retain them through an exciting destination that caters to living, working, socialising and being closer to nature.

“We have always believed in the huge potential of this centrally located site in Worcester and have sought to create a development which will benefit the local community. Therefore, since submitting our original planning application last year, we have listened and responded to a number of comments to our plans. Working closely with stakeholders and our expert consultants, we have not only amended the scheme to reflect the feedback received but also ensure that Lowesmoor Wharf is viable and able to deliver on all the improvements to the public space we were hoping to achieve.

“We are grateful to those who have engaged and worked with us constructively over the last few months and helped us shape the plans which we are excited to bring forward today.

“I am confident that this development fits well with Worcester’s vision for the future. It is both forward looking in its design and sustainability, seeking to create new spaces for people, attract investment and benefit the local community, while also responding to the city’s rich heritage and supporting it in its post-COVID recovery.”

Reflecting Worcester City Council’s declaration of a climate emergency and ambitions for Worcester to be a carbon neutral city, Lowesmoor Wharf includes a range of sustainable features including roof mounted PV panels for on-site energy generation, green sedum roofs for insulation, noise reduction and improved air quality, LED lighting, an efficient building fabric, heat recovery systems, rainwater attenuation and air source heat pumps for the commercial units on site. If approved, the scheme is set to bring a major economic boost to the city of Worcester and the surrounding areas. Analysis by international consultants Rider Levett Bucknall rated the scheme as “outstanding”- contributing almost £4 for every £1 invested. It will provide a whole life value of £362 million and create 175 jobs, apprenticeships and work placements in the construction phase alone. The social value of the proposed development is also high, offering well-being benefits, drawing in additional investment, discretional spend for local businesses and additional income generated for local infrastructure and improvements.